Social media is much more useful  – and fun – with friends.  Twitter has a section where you can find friends using your email address book.  However this is one of the biggest mistakes I’ve made in social media and here’s how you can avoid or correct it.

In theory – a good idea.  You need to first authorise Twitter to import your email addresses from Gmail, Yahoo, Hotmail or AOL.  I did this with my Gmail account and had thought it would be a good way to let any of my connections who I wasn’t already linked to on Twitter to connect there.

In practice – I’ve ended up spamming and annoying my friends and business connections.  The problem is that Twitter don’t just send one invite….they keep hassling those people who haven’t joined on a regular basis.  Nowhere can I find Twitter admitting how often and for how long, but I have had a contact write to tell me they have had several emails over the last month like the one above. 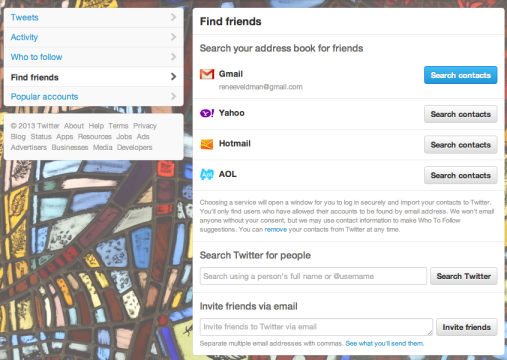 I do find this just a little unsatisfying – I would have liked to have seen a list of the contacts they had been sending emails to, so I could see who I was unknowingly hassling.  I suppose going to my contacts on Gmail could do that, but I wouldn’t know for sure exactly who was emailed and when.   I just hope that now, I won’t be bothering friends and connections, both those who have taken the time to politely tell me (including my mum!) and those who have been quietly annoyed!  Apologies if you were one.

This may also be a co-incidence, but not long after I used this feature, my IP address was blocked from using Twitter.  That’s a bit of a long story which I’ll save for another post.

So the moral of this story?  I think that using the finding friends feature on Twitter seems and easy way to build your followers – but is actually a bit of a lazy way and you risk annoying people.  Instead, I’d recommend organically building followers – meaning connecting with others one-to-one, either via the Twitter icon on their websites, business cards or simply asking them when you speak in person if they use Twitter.

I hope this post helps you avoid this social media mistake!

This post is part of the Zestee Social Media School.  If you’d like to learn how to use social media more effectively, take a look at our services page.  Sign up for our enewsletter in the right hand column to receive monthly tips such as this.

27 thoughts on “How to stop Twitter invites to your friends”