A school hall transformed into an authentic medieval banquet hall for more than 300 people?   As a volunteer waitress for the 2011 Abbey Medieval Festival Banquet, I had the incredible experience of being there from start to finish of this fantastic event.

It is a much-anticipated launch of the festival, and sold out months in advance.  As I wrote about in the post about the entire 2011 Abbey Medieval Festival, I was disappointed to not be able to attend the tournament the last couple of years and wanted to be more involved in 2011.   When I went along to the Cutie Curators Club at the Abbey Museum at the end of May I enquired about a Banquet ticket for 2 July.  Sold out?  Already?  I was really disappointed but they suggested one way to be there was to consider volunteering on the night instead.  I thought it over – for about 5 minutes – and signed up online as soon as I was home!  Not long afterwards, I went for a fitting.  No glamorous medieval gown for me….but still a lot of fun to have a costume and role to play.

On the day, the volunteers were due to arrive at the hall at 4pm.  It was my first time to St Michael’s College.  I’d been to the Abbey Museum twice and had noticed the sign for the college – but very wrongly assumed it was just a small building as a part of the museum.  I lost my way and asked directions near the museum and discovered it’s actually an entire school that blends beautifully into the bushland!

It was exciting to walk into the hall and be greeted by this (and this is just one small section!).  Seating for 300 people, with beautiful banners hung throughout.  Yes, that is bread as plates…and not a fork to be seen as was apparently authentic for these times.

Head waitress, Jo, gave us all an individual briefing.  I was most amused by the “rules” of addressing guests as “My Lord” and “My Lady”, and learning we must curtsy every time we crossed the back of the hall facing the high table.  The kitchen was on one side and the tables and washing up area on the other, so this ended up being LOTS of curtseys!  (I’m guessing around 150-200 throughout the evening?  Any other volunteers want to guess?)

Here is a short video I took at the beginning:

After that, there was no time for videos or photos, and it was also very difficult in the low lighting but I can tell you it was a visual feast!  You can view this great slideshow provided by   Greg Hudson Photography , which he took outside the hall.  You can see my own photos here – though I haven’t had time to edit them so there are several blurry/double ups.  I also took some short videos I hope to edit soon but think in the low lighting they haven’t come out very clearly.

I was fortunate enough to be one of those allocated to take the tickets at the door, so had the pleasure of greeting many of the guests (M’Lord, M’Lady!) and seeing the amazing array of costumes.  Gorgeous.  Then it was FULL ON for the next few hours.  I lost count of the number of water glasses I filled from beautiful – but really heavy – terracotta jugs.  I was also so was glad I wore my comfy shoes. The atmosphere was amazing and it was so exciting to be part of the evening and we were all dedicated to making sure everyone had a great time.

After the guests arrived, it was all very different in reality from the briefing!  Then, in an empty hall, it seemed rather simple to deliver the “removes” and “issue” (a series of dishes) and to place the platters between candlesticks spread out along the tables to ensure.  Each platter was to share between 8 people but in the craziness of so many people, so little room on the table and many other factors, this wasn’t as simple as it seemed, though we tried our best. 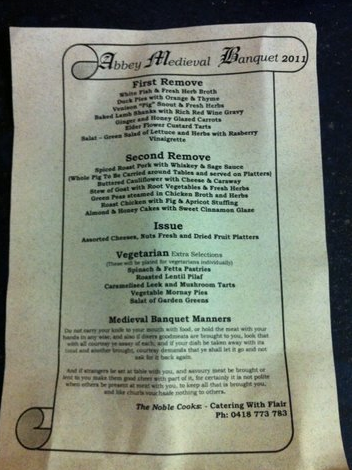 Of around 15 dishes in total, the most popular was the lamb shanks…and due to what may have been honest confusion (though we did hear rumours of some literally hiding dishes beneath the table to be served extra!) there was not quite enough to go around to all 300 (despite I think more than 400 shanks going out).  With so many factors at play and so much amazing food – I’m still rather amazed myself at the drama this seemed to cause for some but guess it is all part of the experience….maybe in medieval times, swords would have been drawn!

Overall,  I am proud to have worked with a wonderful team of very willing and dedicated volunteers.  We were by no means fully trained silver service staff but everyone worked so hard and learnt so quickly.  We had several team “huddles” during the night to ensure we did all we could to meet expectations of every guest.  We adapted serving styles after the “lamb shank saga” which meant we had to walk a lot further with heavy dishes but we wanted to make sure everyone enjoyed the evening.  Every single one of us worked tirelessly for hours and hours until our legs and backs literally ached – but it was amazing to be part of a team who all had a job to do and simply kept going until it was all finished.

I found one of the most challenging parts was carrying platters of amazing food and not being able to take even a little taste!  We were fortunate enough to be able to sample a few of the leftovers later in the evening (but no lamb shanks! haha).  I did have a couple of really unique flavours which has inspired me to research more about the herbs and spices and recipes.  Catering was provided by Catering with Flair!  Laetitia was the head chef and did a wonderful job, especially under such pressure.

The rest of the night went by in a bit of a blur as we were so busy serving, then clearing tables, washing up, and finally cleaning the whole hall.   When I left just before 11pm, all the tables were folded & stacked, pews also piled on the sides of the hall, and crockery washed and packed up, you could hardly tell what had happened in the hours before.

To again take a marketing perspective as I do for this blog, it’s amazing how many mixed experiences and expectations you have at one event.  For me, even after working as hard as I ever have for hours on end, catching only glimpses of the entertainment and eating just a small fraction of what the guests did, it was an amazing night I will remember for a long time.   It seems many others felt the same way, though that the odd few have posted in dismay on the Facebook page over issues such as the lack of lamb shanks and not feeling they got their “money’s worth” with the food.   Though everyone is most certainly entitled to their opinions, I feel it’s sad that this is what some remember of this evening.  Personally, though I didn’t “pay” the $80 to be there the guests did,  I dedicated my valuable time and energy which I feel is worth much more.  Yet, even going with high expectations, the event and small samples of food exceeded them.

The continuous entertainment was impressive, from fire twirlers to medieval dancing and lovely music by Anon – all of which I would quite happily pay to see separately.  (I didn’t have a chance to get the names of most performers so please feel free to post below if you are one and share a website etc if you have one!).   Overall, brought together in one evening it was an incredible atmosphere, fantastic value for money and a very unique and well run event from my perspective.

Ironically, my initial plan was to volunteer this year, then hope to return as a guest next year if I bought my ticket in time.  However despite the aching legs and utter exhaustion at the end of waitressing, I have decided I would actually rather return as a volunteer!  The camaraderie, teamwork, and chance to be totally involved in ensuring such a large scale event could occur really made volunteering at the Banquet a highlight of my year.  Can’t wait for the Kids day on Wednesday and the Festival next weekend!